To celebrate 10 years of good food and community, Market of Choice will host a storewide event *April 15-16 *that will include local vendors, demos and tastings, a giant cake, childrens’ cupcake decorating, a fajita lunch, giveaways, taste-offs and more.

For each customer who signs a giant anniversary card on display, Market of Choice will donate $1 to the Ashland Food Project, up to $1,000, that will benefit the Ashland Emergency Food Bank to help local residents.

In addition, customers can also cast a ballot for their favorite local
nonprofit – the charity with the most votes will receive a $1,000 donation from Market of Choice.

A Concert to Remember

The most RADICAL Singer / Songwriters  from East and West, Together in Ashland for …

A Concert to Remember 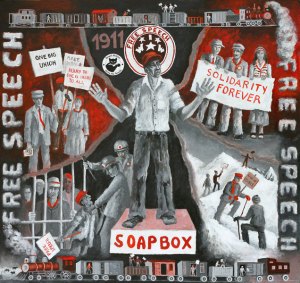 George Mann is a New York City-based labor activist and organizer who has toured for many years and produced the “Hail To The Thief!” anti-Bush CD compilation series.  His newest release is the veterans compilation “Until You Come Home” songs for veterans and their kin. www.georgemannmusic.com

George will be joined by Mark Ross, Eugene Oregon’s most famous unknown folksinger, storyteller, raconteur and multi-instrumentalist.You can hear some of his work at www.lehnherr.com/butte/.

Also joining the celebration is Southern  Oregon’s most radical singer/songwriter Patrick Dodd writes “social justice” music from the living room to the front lines of the resistance. Patrick’s music educates, motivates and empowers the masses to stand up and resist injustice. www.patrickdodd.com

What was the Wobbly Walk through the Siskiyous?
In February 1911, over a hundred members of the IWW left Portland on freight trains bound for Fresno, The group consisted of young working men willing to die for free speech. They risked being beaten by strike breakers.

Nearly a hundred Wobblies made the hazardous trek south by foot through the snow-covered Siskiyous after being kicked out of the box cars in Ashland. By the end of their trek they had walked roughly 150 miles across the frozen Siskiyous.

Announcing for Southern Oregon… “We Are One” solidarity rallies honoring Dr. Martin Luther King Jr. and his commitment to workers rights.

On April 4, 1968, Dr. Martin Luther King Jr. was assassinated in Memphis, where he had gone to stand with sanitation workers demanding their dream: The right to bargain collectively for a voice at work and a better life. The workers were trying to form a union with AFSCME.

Join us in solidarity with working people in Wisconsin, Ohio, Indiana and dozens of other states where well-funded, right-wing corporate politicians are trying to take away the rights Dr. King gave his life for: the freedom to bargain, to vote, to afford a college education and justice for all workers, immigrant and native-born. It’s a time to show movement. We are one.

Beginning with a 6:30 – 7:30 p.m. candlelight vigil in Medford’s Vogel Park, and continuing April 4 with rallies in Medford and Ashland, unions, people of faith, civil and human rights activists, students and other progressive allies are standing strong in the face of incredible attacks on workers and our communities.

April 3 and 4 “We Are One” events are organized by Southern Oregon Jobs with Justice, local unions, community organizations, students and people of faith.

“I am convinced that if we are to get on the right side of the world revolution, we as a nation must undergo a radical revolution of values. We must rapidly begin the shift from a thing-oriented society to a person-oriented society. When machines and computers, profit motives and property rights, are considered more important than people, the giant triplets of racism, extreme materialism, and militarism are incapable of being conquered.”

–Martin Luther King, Jr. from his speech “Beyond Vietnam — A Time to Break Silence” 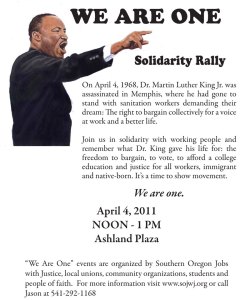 Stories of what we are creating in our Rogue Valley community.

Vigil for the Arizona Shooting Victims : Violence Is Not The Answer

The Jackson County Democrats will join with Women in Black and Citizens for Peace and Justice for a special silent vigil to honor the victims of the Arizona shootings Saturday, January 15th, 12:00-12:30 in Vogal Plaza ( Main and Central) Medford. Everyone is invited to stand together for non-violence. Please wear black if possible. Respectful signs are appropriate.

Several years ago (Nov ’06), my friend Terry Starbucker rolled into Des Moines. Business blogging was really just getting started. About 10 of us gathered to meet with Terry for coffee and an “institution” was born.

Central Iowa Bloggers (#CIB). My has this group grown! Now, on any given 1st Friday, 80-100 people might flow through at various times and lengths, talking about how Social Media is (or isn’t) helping their business.

In Akron, OH – Chris Brown and others started up an ABC group to do likewise. Though I’ve not yet been able to visit their group, I’m sure some great conversations have been had around the coffee tables.

These “coffees” are always energizing and educational, and I’m hoping we can do the same in Southern Oregon.

So this Friday – the first Friday or the month – several business bloggers/Twitterers/Facebookers are gathering at Downtown Grounds (map) at or around 7:30 to ignite similar conversations.

Folks I know will be there:

* Ginger Johnson from Women Enjoying Beer (and a former conversation/coffee cohort at the Iowa events)
* Mike Frey and Tisha Oehmen from Paradux Media
* Brooke from Downtown Grounds (though she’ll be working)
* Myself – from ConverStations:-)

Folks who should come:

* Anyone interested in how/why/if Social Media is right for their small business, or how they can improve their efforts — or best yet, how they can share how the rest of us can improve ours.

Photo of the Day

Photo of the Day